It was a hot day, and they were just about ready to head in off the river when Coles had an idea.

“We need to catch ourselves a big one,” he said, casting his line one more time. The cork plumped near

the stump they’d been fishing for the past half-hour. Sitting on the seat back by the motor, Trace tipped

the bottle up to his lips and drained the last of his beer.

“Waste of time, bro,” he said. “We should rack it up for the day. Cold one and a burger at Freddy’s,

over on the Iowa side, that’s what’s waitin’ for us.”

“Just a little more time. Got me a feeling there’s a big cat down there.”

Trace just shook his head. Everybody who’d ever fished cat on the Mississippi hereabouts knew

That’s why you put out your set lines in the evening and took them in in the morning, not the other way

around. But what the hell. All they’d gotten so far today were a few bluegills, tethered helplessly to their

stringer over the side. Trace watched his own cork bobbing quietly about ten feet left of the stump.

Not a bite for the past half hour. He wanted to get this done, get home and clean up for his date with

Emma. It was his twenty-fourth birthday tomorrow and she’d promised him a special present.

breaking some furniture with her.

There was only one other boat nearby, a nice fifteen-foot flat-bottom, big 30-horse Evinrude motor on the stern, one guy on board. Trace didn’t know what he was doing different, but it was working, he was hauling in some nice ones, had to be six or eight just since he’d arrived about twenty minutes ago. The guy didn’t look like your typical fisherman. Big fellow, wearing a tee shirt and a ball cap. There were lots of big guys with ball caps and tee shirts on the Mississippi, but not like this one. He was built, and Trace had caught a glimpse of the shirt when the guy had motored by them. What the hell did USAFA stand for?

Coles whipped his pole up with a triumphant yell. “Got one!” And damn if he didn’t. Trace sat up as Coles reeled the fish in, his pole bent over nearly double. Big lunker, for sure. “Get the net, bro!” Coles shouted. As Trace set his own pole down, he glanced across the water and saw the big guy watching them.

It took Coles a good two minutes to land the fish, and sure enough it was a catfish, a nice one, maybe ten, twelve pounds. Trace had heard about some real whoppers coming up on set lines or hauled in by guys fishing near the lock and dam a few miles north. This one wasn’t like those big ones he’d heard about, but it was big enough. Trace worked his way to the edge of the boat, almost falling in. That last beer, he thought, might’ve been one too many. But he was still sober enough to stay dry and reach the net down into the water. Coles worked the fish over into the net and Trace lifted it up.

“Damn, a nice one,” Coles said. He hooked a finger into the cat’s mouth and lifted him out of the net.

“Don’t let him bite you,” Trace warned, but Coles just laughed. He held the struggling fish up and removed the hook from the cat’s lip.

“Gonna keep him?” Trace asked. He wasn’t much for cleaning fish in the first place and cat were the worst. No scales, you had to skin them and there were those barbs on the mouth that could slice your hand open, Trace had seen it happen to his uncle once. “A bitch to clean,” he said. If Coles wanted to keep him, that was okay, but Trace wouldn’t clean him, he’d take care of the bluegills they’d caught. They were easy.

The look of victory on Coles’s face dwindled. He pushed his Packers ball cap back as he held the fish. “Well, shit,” he said. Trace knew that look. Coles was thinking, and he wasn’t the easiest thinker in the world, so it took some effort. Still thinking, Coles reached for his beer. Trace could see there was half a bottle left. Coles picked it up, then stopped, and he smiled at Trace.

“Gonna let him go?” Trace asked, hopeful. He really wanted to wrap this up. Emma and her furniture were waiting.

“Yep,” Coles said, “but I don’t wanna waste this beer.” He held the fish over the water. The cat was still alive, Trace could see its gills heaving. The mouth was open. The one eye Trace could see looked blankly out at him. Then the eye seemed to widen a bit more as Coles started pouring the beer into the cat’s mouth.

Coles laughed. “Hot day, let’s give him a cold one!” He wasn’t able to get all the beer into the cat, it struggled mightily and then tore itself away from Coles’s finger and splashed back into the water.

“That’s it, we’re done,” Trace said. He was up for a good time as much as the next guy, and sure, he’d done some dumbass things in his life, but pouring beer into that fish…He reeled his line in and reached for the anchor rope. As he did, he happened to glance over at the other boat. The big guy was watching them. Something about his face had changed, and the look sent a chill up Trace’s back. “Let’s get the hell outta here,” he said.

They came out of Freddy’s and made their way down to the pier. Big cheeseburgers and a couple more beers apiece had them walking a little slowly. Coles was laughing about some lame joke he’d heard inside but Trace didn’t think it was very funny. And when he saw the big guy waiting for them on the pier, he knew this wouldn’t be very funny at all.

The guy was sitting on a bench, one leg over the other. His ball cap was pulled low and he was wearing sunglasses. There was a symbol on the ball cap, Trace didn’t recognize it. As they got closer, he saw the symbol had some wings and a star with a red dot in the middle of it. Looked like some kind of military shit. By itself, not very unusual, lots of guys wore caps with military patches or ARMY or something, and some of the guys wearing them had actually been in the service, but this guy looked like the real deal, especially when he stood up. He was six-five easy, and his tee shirt, the one with USAFA across the front above another symbol, fit him like a damn glove. The guy had a mustache with some silver in it and he was not smiling.

“Hello, boys,” he said, when Trace and Coles got to the pier. The tall guy was standing right in front of them.

Coles was still feeling it from the two beers he’d had inside. “Excuse us, mister,” he said, kind of smart-ass like. Trace had the distinct feeling that was a big mistake, to say it that way.

“Saw you out there catching that catfish,” the man said. His voice wasn’t the deepest Trace had ever heard, but close enough. And there was something about it, like the guy was used to being paid attention to.

“Decided to catch and release?” the guy asked.

“Yep. The sporting thing to do,” Coles said. He was a good six inches shorter than the tall guy and the last time Coles had seen the inside of a weight room was high school football, and that was coming up on six years ago now. This guy, on the other hand, looked like he might just live in a weight room.

“Wasn’t very sporting to poison the fish with that beer,” the guy said. Trace couldn’t see the guy’s eyes behind the sunglasses, but he expected they were staring at Coles pretty hard. The guy reached into his back pocket and pulled out a cell phone. “Amazing devices, these phones,” he said. “Pretty good cameras on them. Can zoom in real nicely. Got a nice shot of you with that fish. Another nice one of the license number on your boat.”

“But my service provider isn’t all the best around here,” the guy said. “I only had one bar out there, so I had to come ashore here to get enough bars to call the Iowa DNR. They have jurisdiction, since we were on their side of the river, and they were very interested in my report. Should have a game warden here any minute now.”

The man looked at him. “You’re not going anywhere, son, not quite yet. Maybe the game warden will want you to go with him, though.”

“Back off, mister,” Coles said. Trace knew the signs and Coles was showing them all, just like the last time he’d been in a bar fight. That hadn’t turned out well for the drunk who’d been coming on to Coles’s girl that night. Trace had a feeling this little encounter would be different.

He was right. The big guy just smiled and said, “We’re just going to wait here for the warden, boys.” Coles reached out to push the guy aside, and then in the blink of an eye, he was on the ground, his hand twisted up behind him, and the big guy was holding on with what looked like hardly any grip at all. He put his phone back in his pocket and pointed at Trace. “Sit down over there on that bench.”

“Yes, sir.” Trace backed up to the bench and sat down, very glad that his dad would be the one doing the skinning, and not this guy. His dad would probably let him live.

The Man in the Arena - Chapter One 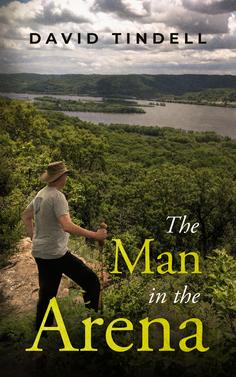