The first President of the United States Joseph Geary had met was Harry Truman. Geary had no

trouble recalling the date:  the sixth of June, 1945, and the place, a reception at the State Department

headquarters. Geary recalled how nervous he’d been at twenty-five years of age, just a few years

out of Yale and into his career at the Office of Strategic Services. On that night, the first anniversary

of D-Day, Geary accompanied his department director to the reception, where everyone was surprised

by Truman’s arrival. Less than four months on the job after the tragic death of FDR, the former

Missouri haberdasher impressed the young OSS operative with his folksy demeanor, behind which the

perceptive agent sensed a stiff resolve. Geary had heard all the talk around Washington that Truman

wasn’t up to the job, was a political appointee by Roosevelt who had barely been on speaking terms

with his vice president all the way back to the campaign the previous fall.
Like many others, Joe Geary wondered whether Truman had the right stuff, but after meeting him

that night, he had no doubt. Over the course of the next several years, their paths would cross again.

Geary also met Truman’s successor, Dwight Eisenhower, and every president since then. Some he had

respected professionally but not liked personally—Kennedy, for instance, a charismatic man whose

philandering was something Geary simply could not approve of, and Nixon, who had a strong grasp of

international affairs but simply was not a man you could warm up to. With others, it was the other

way around.
But he had worked for all of them, first in OSS and then in its successor organization, the Central Intelligence Agency. His forty-plus years in the espionage business had led him to this last stop. As Deputy Director of Operations, he had been summoned to Camp David by no less than the current resident of the Oval Office, and not through intermediaries. The personal call earlier that day came to Geary’s own secure phone, with the White House operator putting the call through. Once the requisite pops and clicks had sounded to give the electronic equivalent of an All Clear, Geary heard the famous voice, chatting for a few seconds, then asking him to come up to Camp David that evening for a talk. It was not a request that Geary or anyone else would have refused.
“The president will see you now,” a man said. Geary knew him as the assistant chief of staff. The chief, Donald Regan, didn’t normally accompany his boss to the official presidential retreat, named by Eisenhower in honor of his grandson. That was fine with Geary, who found Regan to be abrasive and overbearing. Ironically, both Regan and the president had served as lifeguards in their younger days. The word around CIA was that while the future president had spent his time saving people from drowning, his future chief of staff had spent his time watching out for kids pissing in the pool. Geary nodded at the man and went through the opened door.
There was only one person in the room, a man sitting on a leather couch near the crackling fireplace. He put down the book he’d been leafing through and rose, coming forward to greet his visitor. Once again, Geary was impressed by the president’s physical size and ruddy complexion, belying his, what was it now, soon to be seventy-six years? “Joe, come in, nice to see you again,” Ronald Reagan said, shaking hands with a strong grip. “How was the weather on the way up?” He motioned Geary to a chair near the couch.
“Not bad, sir, thank you.” Geary had met Reagan shortly after his inauguration six years ago, had briefed him on several occasions, but always in the company of the Director of Central Intelligence. William Casey, though, was on medical leave now, fighting for his life from a hospital bed. His deputy, a political appointee who hadn’t taken long to rub Geary the wrong way, was now running the agency. Why that man was not here now was puzzling. Casey had allowed his DDO a lot of room, and it hadn’t taken the acting director long to signal that those days were ending.
“Get you anything?” the president asked. “It’s after hours, so the bar’s open.”
“Thank you, sir. Scotch, neat.”
“Good, good.” The president motioned to the assistant chief, still standing in the open doorway. “Bill, tell Ed, Scotch neat for our guest, please. I’ll keep him company.”
While the president made small talk, Geary’s ever-observant eyes took the measure of the man. Wearing a denim shirt, open at the neck, with khaki pants and loafers, Reagan looked more like a successful retired executive than a man still very much active in the world’s toughest job. Geary knew of his exercise habits, his regular visits to the White House gym and his horseback riding and wood-chopping on the ranch out in California. That demanded Geary’s respect. It was only recently, at his daughter’s prodding, that Geary had started a regular exercise regimen again. Still, he looked like he was the older man, and not just because he was bald.

The Red Wolf - Chapter One 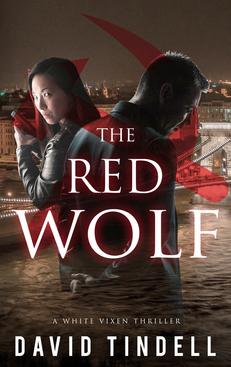